In my first blog post on Optimal Fetal Positioning I focused on the dimensions of the human pelvis. With my second post, I explored the shape and angles of the fetal head. This next post on OFP will be bringing these two parts together, showing how well they can fit when things are done right.

The way a baby moves through the mother’s pelvis on its exit from the womb is described as the “cardinal movements.” The cardinal movements always begin with the fetal head in the LOA position, though sometimes babies do not go that route. The reason why LOA is the most described starting position is as follows.
As the baby enters the inlet of the pelvis, the widest diameter is transverse – from side to side. The baby’s head, when flexed well (or even when not), will be wider front to back. So, the best way for the baby’s head to enter the pelvis is in a sideways, or OT position.

As the baby is pushed further into the pelvis by the power of the contractions, and enters the pelvic cavity, the dimensions change. The cavity is more equally rounded, and since body movements tend to move in a clockwise direction (I’ll explain this more below), the baby is rotated from LOT to LOA. 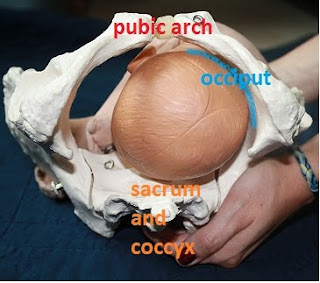 The pelvic cavity is where head flexion really has a big impact. With an equal diameter of 12 cm, a well-flexed head will have a much more successful journey past the ischial spines than an extended head with an 11-13.5 cm diameter. As the baby moves through the cavity, it will continue its rotation from LOA to OA. 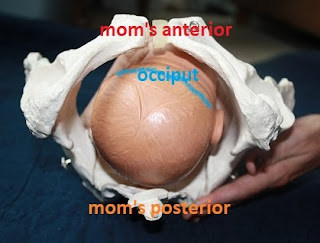 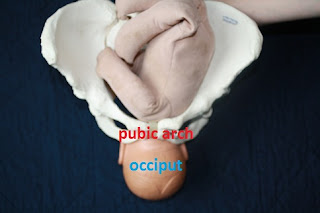 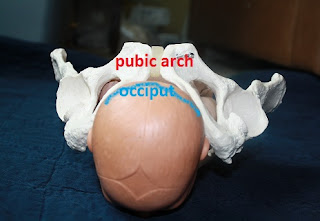 The baby’s head has already gone on its internal rotational journey. As the head emerges, the shoulders follow with their own rotations. The shoulders enter the pelvis side to side, because they are widest that way, which puts the baby’s head in the OA position. As the shoulders move through the tight pelvic cavity, the body spins clockwise, and on the outside you’ll see the baby’s head turn toward its mother’s right leg. 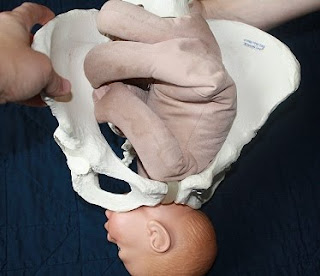 As the shoulders move through the pelvic cavity, the rotation continues until the shoulders are front to back, this being the widest diameter of the pelvic outlet. Because of the pubic arch, the anterior shoulder will emerge first, followed by the posterior shoulder. The baby usually continues rotating until its facing up as the rest of the body is born. 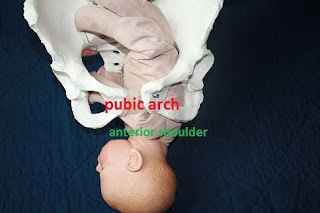 What I’ve just described is the best way that a baby fits through the twists and turns of the maternal pelvis. The two were designed to work together in this manner and allow the baby and the mother to remain intact. Getting a baby to this starting point is what optimal fetal positioning is all about.

Why does it matter if the baby starts in a left position or a right position? Inside the body, there’s a certain phenomenon that takes place called dextrorotation. This describes the body’s tendency to have its processes move in a clockwise direction. Our uteri move the same way. As the uterus contracts and releases, babies are turned in a clockwise manner. If a baby were to start out in an ROA position, this would mean that the baby would need to rotate all the way from ROA to ROT to ROP to OP to LOP to LOT to LOA. That’s quite a long journey and includes a nice length of time moving through the posterior position, which can be extra painful for many mothers. Starting out in the LOA position means that the uterus can focus on pulling open the cervix and moving the baby down, instead of also working on getting a baby into a good position.

GETTING A GREAT START

One of the best ways you can help start labor off right is by paying attention to your body movements in pregnancy.
Consider the way your spine curves. Most of us are lazy when we sit, especially if we like to sit in comfy seats such as couches and overstuffed chairs. In these places, we tend to tilt our pelvis back and curve out our lower spine, rolling our shoulders forward. Because the back of the baby’s head is heavier than the front of its head, sitting in slouched or reclined positions allows gravity to turn your baby to a posterior position, and the baby’s back is curved nicely along your curved back. If you were to sit with the pelvis tilted forward instead, your lower spine would have a nice curve inward, and your body would be more upright. This would allow the uterus to move forward, the baby to fit itself along the curvature of your spine, and the heaviest part of the baby’s head would then be toward your front. 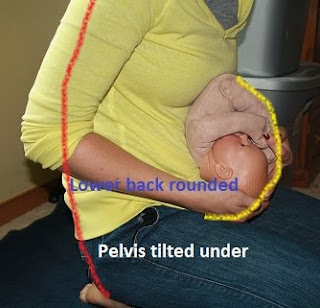 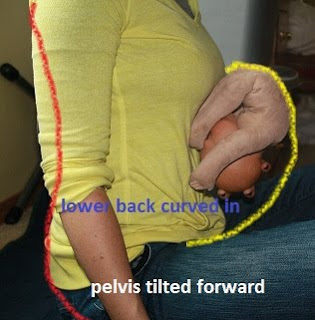 Wow, this is a wealth of information! Great stuff here!